FEEDING THE SOUL IS BACK!

(scroll down for english)

When the light shines and the shadows thin out, the responsibility for freedom increases, it is the moment of celebration of joy, beauty, grace.

We gather to celebrate, to share the gifts received, to get abundance and give wisdom, to see clearly, to see far.

Women and men of wisdom will share their experience concerning the essential aspects for the transformation of consciousness, representatives of the younger generations will offer practical experiences of Technologies of the Sacred and Chants of Medicine.

Essentials for A shift of consciousness

WE MOVE TO ITI ZOOM ROOM 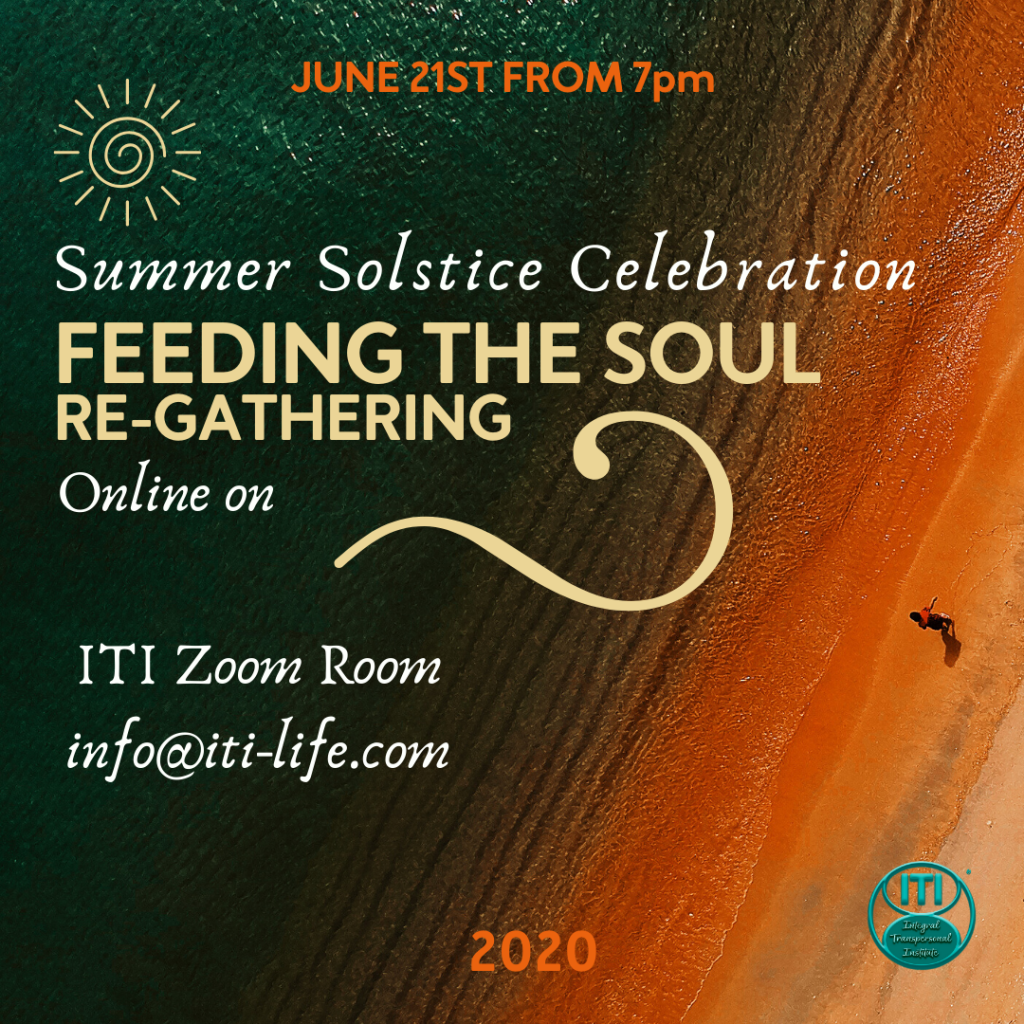 Check Out the Keynotes:

Valentina Lattuada, transformationnel expert. Expert in transformations for artists and professionals. Life and Mental Coach, Acting Coach, Transpersonal Counselor. University degree in History, Management & Communication for Culture and Show. (Università Statale di Milano). 20 year career in acting and directing. Founder of ITActing – Integral Transpersonal Acting, of the Meet Your Dragon 42 Steps Program towards your New Vision of the World and re-writing the Story of Your Life, founder of the Big Dream Surfing Method and the 21 Steps BDS Mastery program (Envision, Manifest, Transform). Teacher and Mum of two. More on www.valentinalattuadaweb.com

Fariba Bogzaran, PhD is a visionary, artist, scientist, who founded the Dream Studies program at John F. Kennedy University in Berkeley, California where she taught as an associate professor for 25 years. She conducted the first scientific research on lucid dream incubation and spiritual experiences (1989). She is the co-author of two major books on dreams: Extraordinary Dreams (2002) and Integral Dreaming (2012) both published by State University of New York Press. Her integral approach in dreams and life is informed by her in-depth study and practice of Taoism, Shamanism, East-West and somatic Psychology. She co-founded Lucid Art Foundation (1998) and has established an artist residency program in the heart of nature. Living adjunct to wilderness for thirty-five years, and a long distance ocean swimmer, she has been active in raising consciousness about ecology, preservation and earth’s wisdom.

Virginia Gawel, (Argentina) Licensed Psychologist, teacher, lecturer and writer. Since 1984 she´s spreading Transpersonal Psychology throughout Argentina and Iberomerica at different universities and through the Transpersonal Center of Buenos Aires (www.centrotranspersonal.com.ar), of which she is founder and Director. She is a member of the Executive Board of the International Transpersonal Association (ITA) representing South America. She has developed her own clinical work system, integrating the models of the Unconscious of the East and West, called Direct Access Techniques to the Unconscious (TADIs, in Spanish). Her most recent book is “The end of the self hate” (2020).

Serge Beddington-Behrens MA (Oxon.), Ph.D is a Transpersonal Psychotherapist, Educator and Healer. He has taught workshops and held spiritual retreats all over the world for the last 40 years and has had over 50 articles published in academic journals. His new speciality is holding what he calls ‘Individualistic retreats’ in his house in Mallorca where a person comes for a week and works intensively on all areas of their lives. He has a new book coming out this summer entitled GATEWAYS TO THE SOUL; INNER WORK FOR THE OUTER WORLD which he sees as a direct response to what he believes the Coronavirus may be asking of the human race!

Stuart Sovatsky. Receiving a Club Scholarship, Stuart is degreed in Religion & Ethics from Princeton University, with a thesis on Nietzsche & Advaita. He has practiced intensive kundalini tantra since 1974. He was first in the US to bring yoga & kirtan to incarcerated youth & to the homeless mentally-ill in the mid1970s & was first choice to clinically-direct the Ram Dass Prison Ashram, receiving the first federal grant to bring meditation into schools, police departments & mental health agencies in 1976. He has some 30,000hrs of counseling experience & directed the first “Spiritual Emergence” service in the world since 1983, the Kundalini Clinic that helped modify psychiatry’s Diagnostic Manual to include Spiritual Issues. His Admiration Therapy was certified by the Russian Government that he has used in transforming over 300 breakup-bound couples & has been awarded over $2M in grants. From 1997-2000, he was founding-consultant for the Oakland $34million award-winning sustainable Greencitylofts.com Stuart was secretly flown to Slovenia to chant over the dying Chair of Unaligned Nations of the World & to S Africa to chant with Sangoma shamans and convened a 40-country World Spirituality Conference in India where The Dalai Lama was represented & Jack Kornfield  & Robert Thurman keynoted. Stuart gave Sanskrit benedictions for Sri Sri Ravi Shankar & presented on Tantra & One World Family. He is the author of Advanced Spiritual Intimacy, Words From The Soul [in acquisition review by Harvard University Press], The History of Yoga in America in the Columbia University Desk Reference on Eastern Religion [contract] & over forty yoga articles & chapters & was interviewed by the Science Editor for The New York Times on kundalini-tantra. He was chantmaster with San Francisco band, Axis Mundi for 20yrs pioneering cave-simulating electronica for 130 Burning Man community events. He received the CIIS forty-Year Most Outstanding Alumni Award, was president of the Association for Transpersonal Psychology for 20years; Co-convener with Robert Thurman of the Indic Wisdom Roundtable, Columbia University; Advisor for the Johns-Hopkins University Psilocybin Study; Teacher of Teachers for Helen Palmer’s Enneagram Institute.   https://princeton.academia.edu/StuartSovatsky

Mauricio de Luna. Man, Father, guardian of the primordial feminine, initiated in shamanic traditions, initiated to Ifà, Priest of Umbanda. Formed in NLP, deep Transe techniques, systemic and neuro systemic constellations. Personal Power Therapist, together with his wife Cintia Luna, he has been developing the “Recriando a Vida” Project for 18 years, for the awakening of talents and authentic human potential. It offers meetings, conferences, seminars and trainings in Brazil and worldwide.

Alessandra Comneno, is a Guardian of Wisdom of the natives of Central and South America, with forty years of experience in traditional ceremonies. Pilgrim of Conscience of the Maya-Tolteca path, she lived fifteen years in Mexico where she learned through daily practices and teachings received. Carrier of Sacred Pipe ritual, she guides people in the Temascal ceremony, the sweat lodge. She supports people in Medicine Wheel initiations by sharing ancestral traditional practices in circles and courses. In 2008 in Italy, she founded the Chakaruna Association – bridge between worlds – and she collaborates as a teacher and coordinator in Europe with the Institute “Investigaciòn Maya-Tolteca Nahualli, Escuela de Artes Ancestrales Maya-Tolteca, El Espejo Horadado”. She is the author of:

She organizes trips and pilgrimages to Mexico aimed at direct experience with the keepers of ancient traditions.

Angaangaq was born in Greenland in 1947. He is an elder, traditional healer, spiritual teacher and shaman from Greenland. He grew up in a remote village in Greenland, where his grandmother recognized his gift to continue the healing tradition of the family and trained him for becoming a shaman. His spiritual task, given by his mother, is “to melt the ice in heart of man”. Already in 1975, as a young man, he received the task from the elders to be a “runner” for them and to bring the message about the melting of the Big Ice in Greenland to the world. His work took him to more than 70 countries around the world. He is a keynote speaker at international conferences on climate change, environmental issues and indigenous affairs and has represented the Arctic people at the UN General Assembly. He has met with personalities like Nelson Mandela, Michail Gorbatschow, Pope John Paul II., Pope Francis and the Dalai Lama and has participated in several documentary films. He has passed on his knowledge to universities, schools, companies, retirement homes and prisons.His teachings come from the Eskimo Kalaallit – a peaceful culture that is thousands of years old and has not experienced war. These teachings have enabled people to survive in one of the harshest places on earth. They call us to bridge the distance between our minds and hearts through strength and gentleness, compassion and love, courage and determination, to make personal and global transformation and healing possible.

Steve Taylor PhD is the author of several books on psychology and spirituality, including The Leap and Spiritual Science. He is a senior lecturer in psychology at Leeds Beckett University and the current chair of the Transpersonal Psychology Section of the British Psychological Society. His books have been published in 20 languages, and Eckhart Tolle has described his work as ‘an important contribution to the shift in consciousness which is happening on our planet at present.’ www.stevenmtaylor.com

Filippo Garrone:
iniciated on mayan Toltecas arts of mexico, Filippo Garrone is a medicine man and community therapist, facilitator of self-knowledge and healing circles, lives and works in Brazil.